What is a BREEAM Thermography Survey?

Home » Knowledge Base Articles » What is a BREEAM Thermography Survey?

Conducting a BREEAM thermographic survey can be one of the easiest and cost effective ways to generate BREEAM credits. Thermographic surveys are now a feature of BREEAM the environmental assessment method and rating system for commercial and domestic buildings. We have undertaken a large amount of thermographic surveys in compliance with the latest BREEAM schemes in London. We also work proactively with clients to ensure a successful outcome.

Infrared Thermography survey is non-invasive, non-contact and hence non-destructive. It can be used to scan large areas quickly – such as large warehouses) and identify anomalies such as defective insulation or areas of dampness and trace and record paths in a way that other methods cannot. 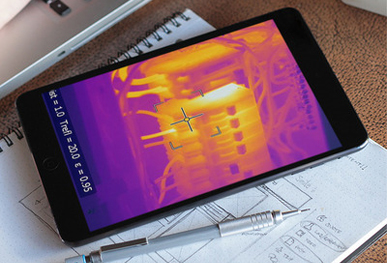 Thermography is a type of photography which is based on infrared wavelengths (as opposed to visible wavelengths). Conventional photography relies on reflected energy from a light source, whether it’s artificial lighting or the sun, which is visible to our eyes. Thermal imaging relies on radiated energy in the infrared (IR) spectrum which cannot be seen by our eyes. All objects emit radiation energy within the IR spectrum and this IR radiation can and does vary depending on the temperature of that object.

As we cannot see the infrared (IR) spectrum with our eyes, we need to use a device which can detect the “invisible” energy. A thermal imaging camera can do this. The camera builds a pixelated image (much like a normal camera) of the IR radiation which allows us to “see” and measure the apparent temperature of the surface.

Ascertaining the surface temperature of a building helps our thermography engineers to decipher what is actually being detected, such as missing insulation, thermal bridging and other building heat loss aspects. We can also detect objects which contain moisture using different thermographic techniques.

Building thermography is usually a qualitative methodology, that’s means we look at temperature comparisons rather than absolute temperatures. Therefore, thermal images are often used with the temperature scale removed, as it’s more important to highlight the anomalies, patterns and relative temperatures. The anomalies show up by using high contrast colours. The colour scale shows relatively cold as black/purple/blue through to relatively hot as yellow/red/white.

When used in conjunction with other diagnostic tools such as air tightness testing thermography can be a very quick tool to highlight air leakage paths so targeted air sealing can be undertaken to improve the air tightness of buildings, thus lowering heating bills and your carbon footprint. Air Pressure Testing has ascertained the thermal performance of many types of building. APT conduct infrared surveys on commercial and residential buildings as well as listed buildings to the latest high performance Passivhaus structures.

If you would like more information in regards to BREEAM Thermography Surveys, please contact us now at: info@aptsoundtesting.co.uk or call Darren direct on: 07775 623464

Alternatively if you would like more information on how to prepare you building for a BREEAM Thermal Survey please click on our Thermal Survey checklist.