Why use Thermal Imaging on Electrical Equipment?

Home » Knowledge Base Articles » Why use Thermal Imaging on Electrical Equipment?

Thermal imaging can pinpoint potential problems in cables, distribution boards, transformers, switchgear, plant rooms and other related items. Thermal imaging on electrical equipment will identify temperature differences caused by changes from normal operating conditions, it can also detect hotspots from a developing problem, for example the camera is sensitive enough to identify heat bleed along a cable within a bundle allowing quick diagnosis and subsequent remedial works to take place. 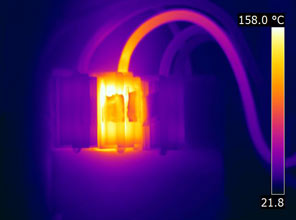 Many defects can be picked up with thermal imaging surveys, Loose or corroded contacts, load imbalances, poor cable joints or an overloaded transformer will all generate excess heat. A thermal camera can often show the problem before an electrical test or visual inspection would uncover it. The severity of the problem can be determined by comparing the temperature rise of the fault with the properly operating component under the same loading conditions.

Past data from thermal imaging of electrical installations shows a significant rate of potential fault detection for an initial survey, typically in the region of one to two faults for every 10 panels inspected.

A thermal imaging survey is an extremely low impact fault diagnosis tool for electrical fault finding. It requires no contact being made with the components which means that the components can be checked in a live state with little danger to the user, there is no effect on the components or interruption in any processes the electrical system may be controlling, thus no downtime for server rooms and/or manufacturing plant etc.

Electrical faults can lead to breakdowns and the potential for fire hazards. In both cases the losses due to downtime and repair costs can become hugely costly.

If you would like more information in regards to Thermal Surveys on your Electrical Installations please contact us now at: info@aptsoundtesting.co.uk or call Darren direct on: 07775 623464.

Alternatively if you would like more information on how to prepare you building for a BREEAM Thermal Survey please click on our Thermal Survey checklist.